Didi Moses is better known as a judge on SA’s version of So You Think You Can Dance – Seasons 1 & 2. Her extensive dance background comprises of Funk, Hip Hop, Jazz, Tap, Spanish Dance, Argentine Tango  and Ballet.

As an established choreographer & creative director,  Didi has worked on various tv commercials, film, music video and theatre productions as well as corporate events supplying dancers and choreography for singers such as Loyiso Bala,  and companies including Vodacom, Chivas Regal, Old Mutual, Shell & Huawei, where she choreographed a launch for them in Cairo, Egypt.

​Her career started at the age of 19- years. She has performed in various musicals at Artscape & the Baxter Theatre & at The Royal Lyceum Theatre in Edinburgh at the tender age of 19, where after she travelled to London, did classes at Pineapple dance studios, then proceeded with a career in Musical Theatre for 13-years, when she came back to South Africa. She also performed in a Kramer/Petersen production in Malaysia, & later on branched out into the Film Industry, where she finds herself, very happily today.

As a public figure, with her stint on So You Think You Can dance-South Africa, Didi is requested for many hosting duties, as well as judging various events, including: The presenter search for Selimathunzi on SABC1, MTV VJ Search in Cape Town, guest presenter on Selimathunzi for MCQP 2012, judging for dance competitions such as Dance Star International, South African Dance Awards, adjudicating/examining for CAPA & Waterfront Theatre School choreographic competition, & a  for a charity called Rachel’s Angels.

Didi has also had the honour of working with John-John O’Connolly – choreographer of the movie Moulin Rouge, Bruno Tonioli – judge on Strictly Come dancing – UK, & sat on a panel with Nigel Lythgoe – creator of So You Think you can dance.

Didi is also a renowned performance coach for singers & actors, for various performances, including stage, film & auditions. As at January 2018,  Didi has choreographed 86 TV commercials to date, making her the most sought-after on-set choreographer for TV commercials, & being requested globally from Directors around the world, to be the choreographer on movies & commercials being shot in South Africa.

Her impressive CV extends beyond that of a dancer & choreographer. She is an all-round creative, & as she always says: “I tap into every creative aspect of myself, wherever I can.”

Didi has traveled  around the country teaching workshops as well as master and guest classes at Pretoria’s Tswane University and the Dance Junxion in Rosebank in Johannesburg, Elite Dance Studio in Vanderbijl Park & Global Dance Convention, (an annual dance gathering of young dancers around South Africa, flocking to attend the workshops with selected choreographers around the Country). 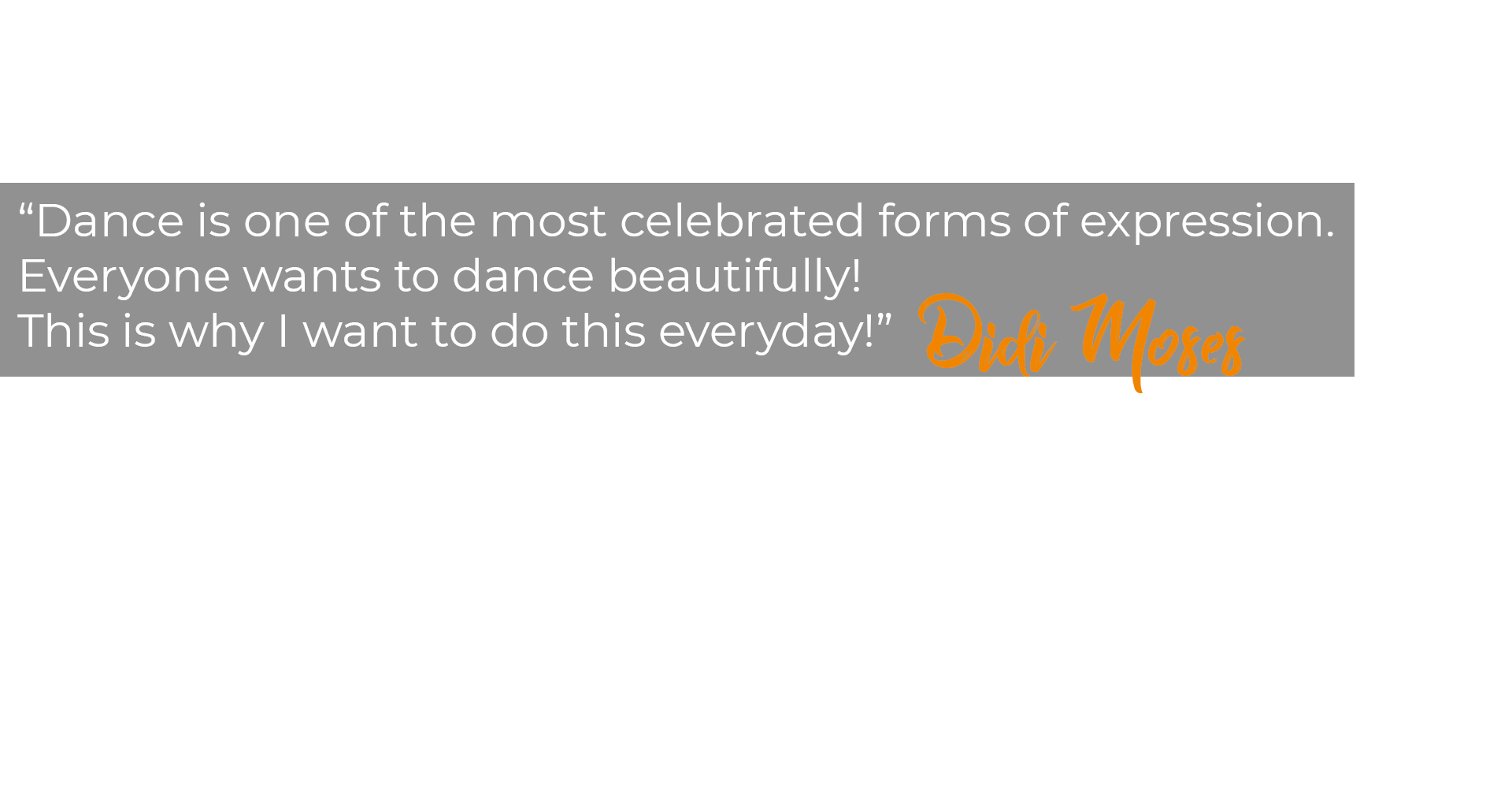 Didi’s company Love.Dance Agency supplies corporate, on-camera and private client with a large variety of dance entertainment for any kind of event or production.
She also offers group, private and specialized dance classes as well as workshops, master and choreographic classes for professionals and dance companies.
If you have an up & coming event or function, & need quality entertainment, don’t hesitate to call Didi & her creative team, for a one-stop-shop service of everything from performers, costumes, hair & make-up: ensuring a full service of entertainment of a high standard.

Didi is also moonlights as a personal stylist & make-up artist, specializing in fantasy & theatrical make-up, specifically for corporate events, & has a keen interest in costume design.

Her activewear label, LeoTART,  is available on order from her Instagram page: @leotart5678.
​A funky, comfortable range of rehearsal, dance & activewear for dancers & dance lovers, & now introducing swimwear, made from 4-way stretch, matte lycra, as well as her costume range, called The Showgirl Collection.

​Did describes herself as a workaholic, who maintains a positive & energetic outlook on life.

​Her motto: There’s only one way to do something; the right way!